Some 216 Aboriginal people were killed in a massacre following the Wushe Incident. Japanese-recruited Aboriginal militias took 101 heads and returned them to the Japanese for bounty payments.
PHOTO: COURTESY OF DENG SHIANG-YANG

As today's 70th anniversary of the Wushe Incident ( ÃúªÀ¨Æ¥ó), approached, wide discussion about the event has been brought into the media spotlight. The incident, in which Aboriginal people on the island violently protested against Japanese colonial rule, is also known as the Paran Incident, after the name of the Wushe area in the local Aboriginal tongue.

This anniversary is different, however, in that indigenous people themselves are conspicuous by their efforts to participate in the discussion and review history from their perspectives. They are reflecting on what the incident means to them, while, as they would have it, interpretation of the story has previously been the exclusive preserve of Han people and Japanese, whose power, they say, gives them a form of "cultural hegemony."

The indigenous people have urged the government to mark today as a national holiday commemorating the incident.

Occurring in 1930, the Wushe Incident has been portrayed ever since the KMT regime withdrew to Taiwan in 1949 as a righteous case of Taiwan residents resisting the yoke of their colonial masters.

The incident was triggered by oppression by Japanese: the snatching of lands from indigenous people, the enslavement of Aboriginal men, and the mistreatment of their women.

On Oct. 27 1930, over 300 Aborigines attacked Japanese who had gathered at a sports event in Wushe and killed over 130 of them. It took the Japanese two months to completely quell the uprising. 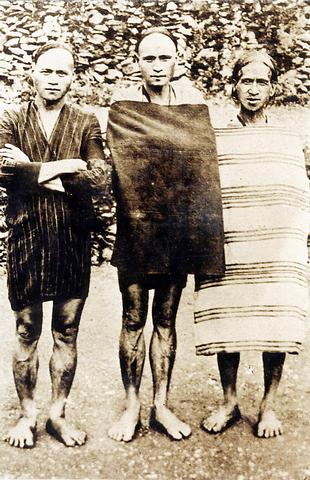 The Japanese later massacred surviving members of the families of Aboriginal participants, forcefully expelling the rest from their home territories.

Moving to assert their right to interpret the Wushe Incident, Aborigines spoke up at an international symposium last weekend, providing their view of the event and making it no longer the sole prerogative of Han or Japanese or a "propaganda tool to ensure the people's solidarity in defending the government from foreign forces."

"Representation in history involves power," said Walis Nokan, an Aboriginal writer, "I see the Aborigines' speaking up in the symposium as a symbol of the transfer of power."

Walis and Aboriginal DPP lawmaker Payen Talu both said that the KMT government had emphasized the incident as a momentous example of "the ROC people's iron will to fight against the country's enemies."

"Describing indigenous people as mere ROC citizens in the course of interpreting history ... is just like the KMT government's efforts to diminish sovereign consciousness and eradicate self-identity from tribal people," said Payen.

Kumu Iyung, who is undertaking field research on the incident, complained that Han governments, fully grasping their power to "twist history," adopted a form of "cultural hegemony to control Aborigines."

She said the event's great impact on the Aboriginal tribes should be examined. "We indigenous people have lost our self-identity and awareness of our individual rights while being taught to recognize ourselves as only part of the nation," she added.

Taiban Sasala, an Aboriginal member of the Non-Governmental Organization Committee of the Ministry of Foreign Affairs argued that: "The indigenous people should have their tribal history instead of following history through they eyes of the ROC to examine practically and honestly issues related to the tribes."

Siyac Nabu, a senior citizen of the Sediq ethnic group, whose mother was involved in the incident, agreed with Kumu and suggested that indigenous people should review the history of the event and compare it with their current situation.

They agree that a transformation of education, putting more emphasis on the culture and history of the tribes, is vital for the self-identity of indigenous people and awareness of their own rights as a counter weight to "Han chauvinism."

"I think the Japanese incurred the great wrath of our ancestors because they neglected the fact that we Aboriginal people have rights over lands inherited from our ancestors," Siyac said.

Siyac said the Japanese had ignored the traditional legal practice of claiming land properties by burying rocks. He urged the government to return lands

"The rocks our ancestors buried are still there, please give us what we deserve," he said earnestly.

"Our lands are falling even faster into the hands of the government and the Han people than they fell into those of the Japanese," said Isak Afu, board chairman of the Association of Taiwan Indigenous Peoples Policy (¥xÆW­ì¦í¥Á±Ú¬Fµ¦¨ó·|).

The KMT government established regulations to reserve some lands for the indigenous peoples in Taiwan. Such reserved lands are divided for private agricultural purposes and for larger-scale development projects that could be controlled by Han people, explained Pasun Tali, a legislator's assistant.

Nevertheless, the ultimate ownership of the land is still in the hands of the government, which could take it back at any time, according to Kumu Iyung.

A major problem of the reserved land policy is that the area of agricultural land allocated to each Aboriginal farmer is shrinking, making unviable the purchase of fertilizers and other agricultural equipment, as the possible harvest will be too small. The situation is all the worse in the case of farmers who lack sufficient capital and training in cultivation skills.

As a result, illegal renting or transfer of ownership of the land to Han people -- with more capital and skills who are able to make better use of the land -- has occurred frequently. In such cases, the indigenous farmers either become tenants of the farm or give up the land altogether, making their way to the cities where they typically find work doing heavy labor.

The same happens in the case of farmers who have had to follow the forestation policy of the government because they were allocated land for forests instead of fields to cultivate. "But the government grants them little aid in the 10 years or so before the trees grow big enough for any profits," said Yohani.

Although the sale of reserved lands is illegal, judges always legalize the contract when the two sides go to court to seek contractual validation.

"While the enactment and enforcement of law are controlled by the Han people, the indigenous people are doomed to lose the game, because the government will never care about our rights ..." said Yohani.

Some Han people who have contrived to purchase reserved lands from indigenous peoples are pressing lawmakers and public representatives to legalize their purchases. Some have even suggested they should be granted the ownership of the rented land after "investing capital in the land over a period of time."

"These people are a great threat to our land rights because they generally have close ties to the majority of Han politicians," said Yohani and Payen.

Similarly, Aboriginal activists have argued that the government never "assists Aborigines that have priority to develop resources on public reserved lands as related regulations stipulate." Because indigenous people in general lack capital, therefore, Han corporations with political and financial resources can always encroach on these lands with large-scale development projects as the indigenous "are not able to develop the land," activists say.

"One Aboriginal village was forced to move because a cement plant was to be built on the pretext that it would generate profit for the country," said Yohani. He said that officials even threatened Aborigines that failure to sell their lands "for the country's benefit" would result in their forced removal without compensation.

Indigenous people, moreover, are forbidden to gather any natural resources or hunt for their living or for ritual purposes in the national forests, regardless of the fact that their ancestors had lived and undertaken such activities there for many years without harming the forest, said Sasala.

Right to use resources vital for future

He said that to return rights to use resources on the land is vital to keep people in tribes for cultural reconstruction and to ensure their livelihood in their home lands so that they don't suffer discrimination in the cities. Isak complained that the indigenous are not even allowed to sell crafts on the street in front of their houses or gather waste wood pieces from the sea for construction or craft use just because the area is "claimed as a national tourism area."

"The Han people, or the government, are stealing our lands and our land rights with harsh policies that sometimes appear deliberate and designed to profit big Han corporations just like the Japanese did with their violence," criticized Kumu and Yohani.

Reflecting on the fact that the indigenous peoples' difficulties in terms of land rights have not been improved in 70 years, indigenous activists said that what they could do was to educate their people to be conscious of the need to defend their rights. "But the Han people should educate themselves to respect us too," said Yohani.

Activists and Yohani also suggested that the setting up of a tribal council is crucial to the defense of the indigenous peoples' rights in a Han-dominated society.

All in all, Siyac, as a senior citizen who has witnessed the 70-year plight of his people, pleaded again earnestly to the government for the return of land rights to them on the basis of equality. "We are also humans with souls woven by our god," he concluded.